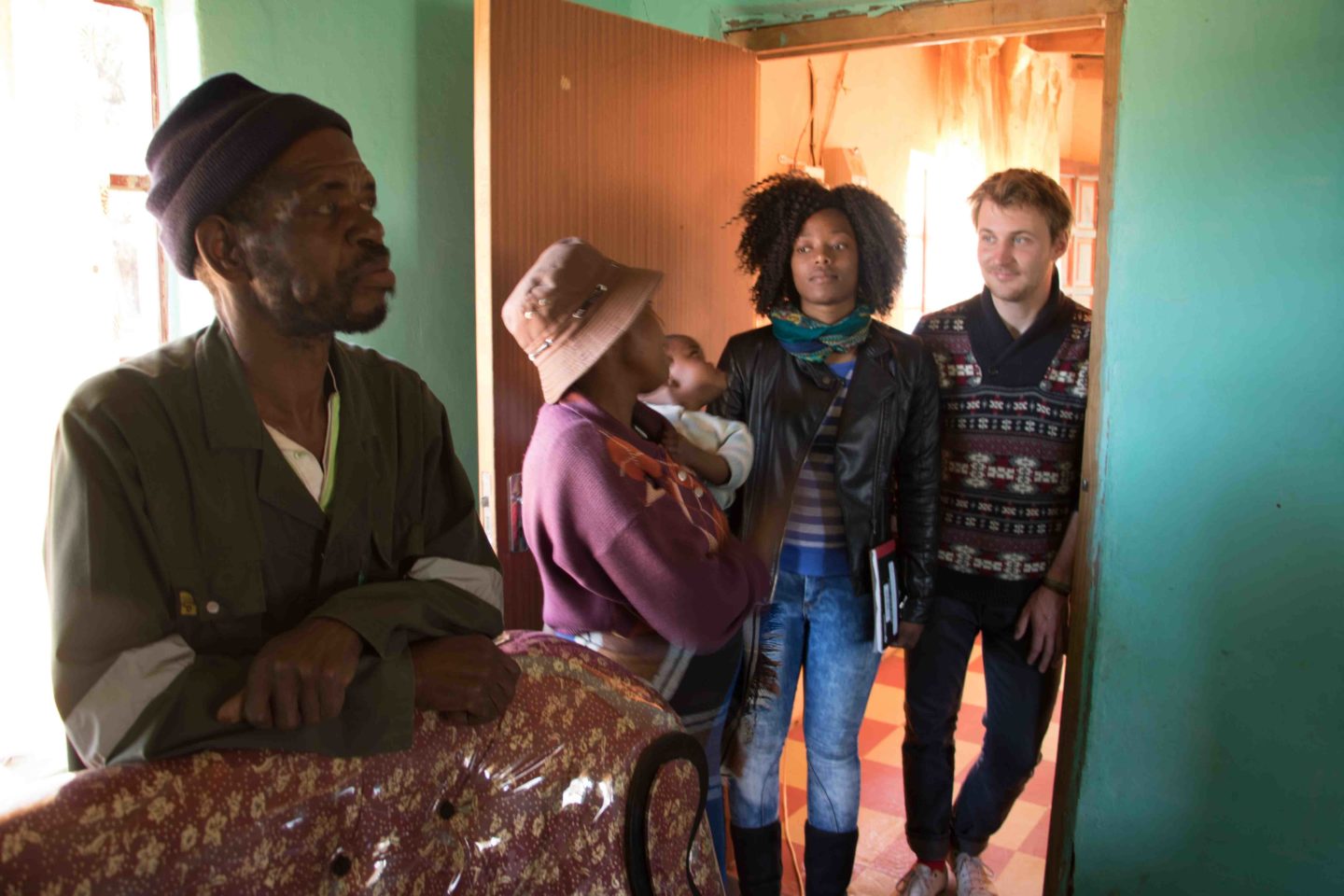 This month SaveAct says goodbye to our most recent international volunteer, Robert Ungethuem, who will be finishing his second stint with us.

In recent years, SaveAct has benefited greatly from the skills shared by post-graduates from Germany, Italy, Belgium and India. In return, these highly-qualified visitors have enriched their academic knowledge with an intimate view of how our savings model works in the context of a developing country.

Ungethuem, who is from Berlin, first came to South Africa in 2010 to work as a volunteer at Zakhe Agricultural College in Baynesfield, as an alternative to compulsory service to the German army. That experience was a turning point in his life.

“After that, I decided that I wanted to work in development, in something tangible and applicable, so I studied business economics at Maastricht University in Holland, where I was equipped with mathematical and statistical skills.”

After notching up a diploma in entrepreneurship and microeconomics from a Chilean university and a master’s degree in international development studies from the University of Bath, he was headhunted in 2015 to join SaveAct by Silvia Storchi, another Bath post-graduate who had been spending time with the organisation.

“The next thing, I was skyping (SaveAct executive director) Anton Krone, and then he told me the position was in Pietermaritzburg. For me, coming back five years later after studying for my bachelors and master’s degrees in development was closing the circle.”

After staying for one year his visa expired and he had to leave, but he managed to come back in 2017 for another 18 months. Explaining what he did during his stay, he says everyone at SaveAct is a “jack of all trades. I’m someone who can drive projects and I was responsible for pushing our agenda in all directions. Mostly I collected, processed and analysed information and fed it back.” Ungethuem was also involved in several of SaveAct’s digital projects.

His main motivation was to find out “what it means to work for an NGO. What are the challenges, the economics, the constraints, the political factors? It’s about seeing how this whole machinery works.”

He left after his first visit with an overwhelmingly positive impression, and a post he wrote on the alumni page of Maastricht University’s website about his experience inspired Alberto Gualtieri, who was studying there, to apply for a similar post.

Armed with master’s degrees in international economics and public policy, Gualtieri, an Italian national, took over the portfolio of monitoring, evaluation and learning from Ungethuem at SaveAct in November 2016, returning to Europe in October 2017. A self-confessed nerd and “numbers guy” with a keen interest in finance and microcredit, Gualtieri says the position was a good fit because it involved working with quantitative data.

“Numbers are king,” he says. “People are more likely to believe what you’re doing if you have the numbers to back it up”. For his masters, he’d learned about data analysis and econometrics—the application of statistical methods to economic data—and specialised in social protection and finance.

“Social protection is the study of the welfare state,” says Gualtieri. “How do you design a pension plan, how do you provide a health system, how does the state work in order to provide for its citizens?” It was this interest that drew him to SaveAct because savings are a type of social protection.

Gualtieri says the task in SaveAct’s monitoring and evaluation office is to “make sure the organisation is going forward in terms of targets and to evaluate the performance of people according to the targets.”

The other part of his portfolio—learning—was where his real passion lay. “It’s about trying to develop new tools and new systems, basically it’s about going forward,” he explains. “SaveAct has a project they want to move forward and you gain the knowledge to make that happen.”

Gualtieri says he was attracted to SaveAct by the opportunity to do field work in a developing country, and the experience he gained surpassed his expectations. “I had all the field work I wanted. I didn’t expect to gain that much knowledge and capacity out of it.”

He experienced some culture shock when he first arrived. “There are cultural differences. For example, I’m very direct and here you have to be sensitive. You have to frame what you say in a way that’s culturally appropriate. I had to learn that.”

He found the inequality in South Africa “staggering. We studied a lot about inequality at Maastricht but there’s a difference between studying and seeing it. Now, when I read about inequality, I have images in my head, images of living in a shack, of an informal settlement.” He was struck by how people cope with poverty and how resilient they are.

“The SaveAct model is amazing. I think it should be exported as much as possible, although it needs to be adapted to different cultures. The way savings groups work, the way trust is built up among members and how financial education is imparted to them and they learn how to manage their money is very impressive.”

Sanghamitra Mukherjee came to SaveAct for a month in 2017 after being awarded a fellowship to do research in a developing country. At the time she was doing a second master’s in public policy through University of California, Berkeley. Her first, in economics, was done in her homeland, India.

Her expertise is mostly in quantitative economic methods and she applied that to looking at an enterprise development project being run by SaveAct in Eastern Cape and KwaZulu-Natal.

“I looked at a sort of impact evaluation of the project to see if it was really meeting its target, especially whether savings group members are able to start and develop an enterprise better than non-savings-group members who are also part of it.”

Mukherjee spent about a month in the field, which she found to be “a great learning experience, because you learn so much about the context.” It was also challenging, because it was difficult to get hold of people, and she found the extent of poverty striking.

“It was interesting to see that even though people were so poor, the amount they were able to save from the small income they received was significant. That must require a level of motivation that’s very high, but it’s a necessity, so that you have something to turn to when you have an emergency. You have limited access to credit, so you have to have that cushion.”

The impact of the volunteers continues to be felt after their departure. Mukherjee’s research highlighted certain issues that could be improved in SaveAct’s enterprise programme, and as a result, some changes have been made.

In the case of Silvia Storchi, who is currently completing her PhD at the University of Bath, she returned to South Africa last year to help produce a collaborative research report by SaveAct and FinMark Trust on the long-term impact of savings groups and stokvels on the lives of their members. The findings of that study have been widely shared in South Africa, and have resulted in several stakeholders approaching SaveAct to learn more about the model.

After Storchi worked at SaveAct and conducted research into SGs, she went on to do her PhD in savings groups in Kenya. These experiences have equipped her to be a sort after researcher in different countries in Africa. Moreover, she continues to work periodically with SaveAct and contribute to the discourse on appropriate anti-poverty strategies for South Africa.

Anton Krone, SaveAct’s executive director, says the contribution that volunteers have made to the development of SaveAct has been invaluable.

“We would not have been able to expand our monitoring, evaluation and learning capabilities fast enough were it not for these skilled and passionate people.

“Another exciting aspect of their work has been their ability to pull in alongside staff and provide training and support to others who have not had the same educational opportunities. In recent years SaveAct has been able to structure overlapping volunteerships, involving foreign and local graduates. Invariably they have complementary skills and experiences, allowing for a steeper learning curve for both and a more rounded service to SaveAct.

“We are extremely grateful to these inspiring people.”