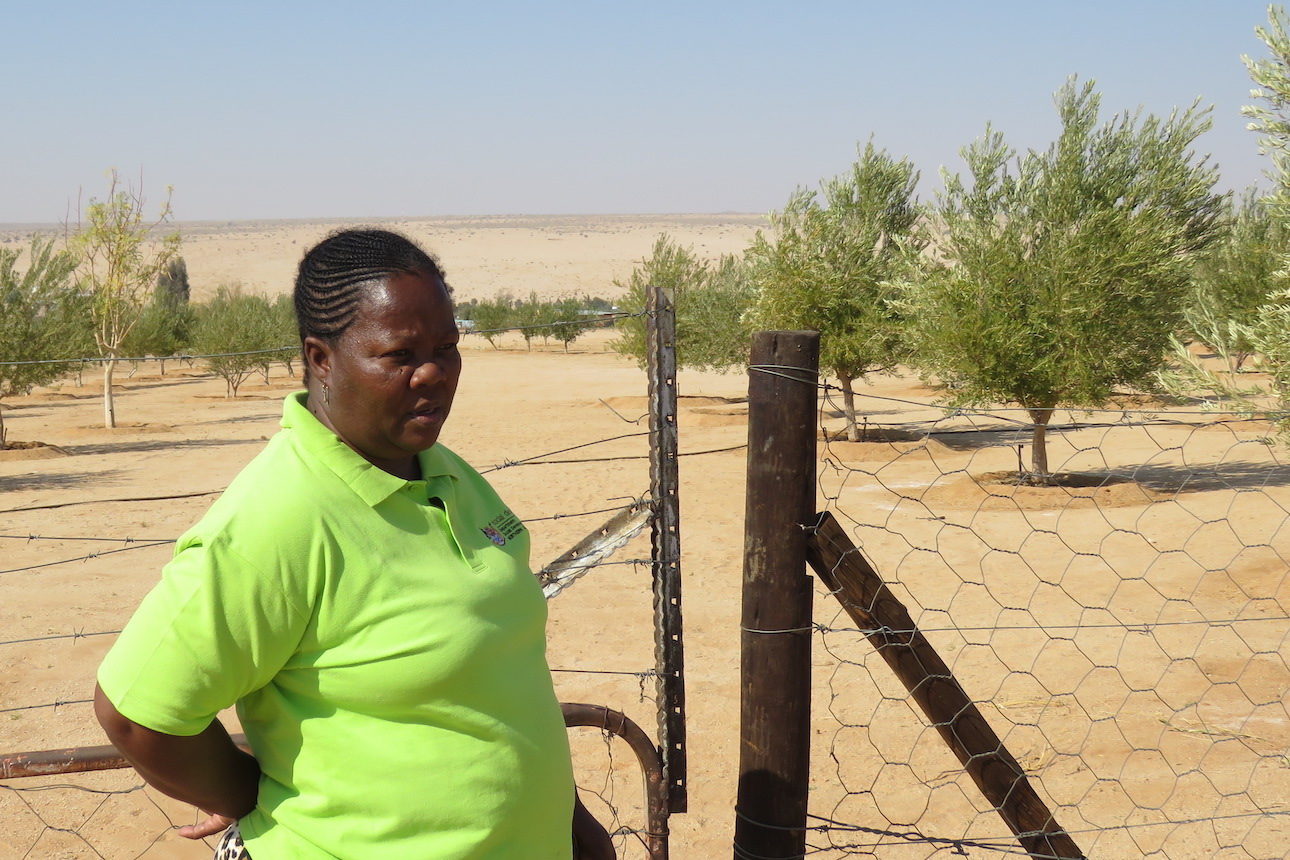 Rewriting a life story with olives

Namaqualand. A place of stark, arid landscapes, magnificent spring flowers, livestock farming and mining. That’s the narrative most people know about Namaqualand, but a black woman called Rosina Secondt is creating a new one for herself. She’s the owner of 250 olive trees in Pella and she is literally rewriting the story of poor rural women in her community.

In Namaqualand farming means livestock and it is mostly a male-dominated world. So to move against the stream, carving out a niche in a sector that often exploits and bars women from entering, takes a rare kind of person. With no formal higher education, this life-long activist has made a point of attending workshops to find opportunities and improve herself. At one such agricultural workshop in 2006, a talk about olive cultivation held by Surplus Peoples Project (SPP) changed the trajectory of her life. Armed with 50 olive trees donated to her by SPP and no experience in agriculture, Rosina planted the trees in her sister’s backyard. Now, seven years later, she is expecting her first harvest from them.

Her journey wasn’t always smooth. “I struggled to get land from the local municipality and I’ve planted these trees based on a manual given to me by SPP and whatever information I could find on the internet,” she says.

“I had no money to pay for labour so my family helped me to work my sister’s land and plant the trees.”

Her tenacity paid off. Over the years other organisations came to believe in her dream and she received another 50 trees from Namaqualand Diamond Fund Trust.  “I then had to find more land and the municipality took too long to allocate some so I had to make a plan,” says Rosina.

“We use to get up at 4 am and water the trees with buckets. But water remained a problem because we were not on the irrigation plots set out by the municipality on the Orange River. Then I approached Vedanta mine for assistance and in 2014  they gave me another 150 trees, some lemon trees and helped me with a sprinkler system.”

And there is more to her plan.

“My townspeople use to get water from an underground borehole. Over the years it fell into disuse and all that I need is a solar pump to access that water.,” she says. “For that and other miscellaneous stuff, I became part of a savings group.

Three family members are also in the Pella Heilige Martin Savings group and the four of them formed the Pella Olyf Cooperative. “For now I want to use my savings for small things like buying crates and a hand press,” she says. Rosina sees herself pressing the olives locally and selling olive oil made in Pella.

She’s still a long way from that, but hearing Rosina speak about her dream made the hairs on this writer’s arms stand on end. It’s a dream full of soul that deserves to be sent out into the world so that other doors can be unlocked for her.