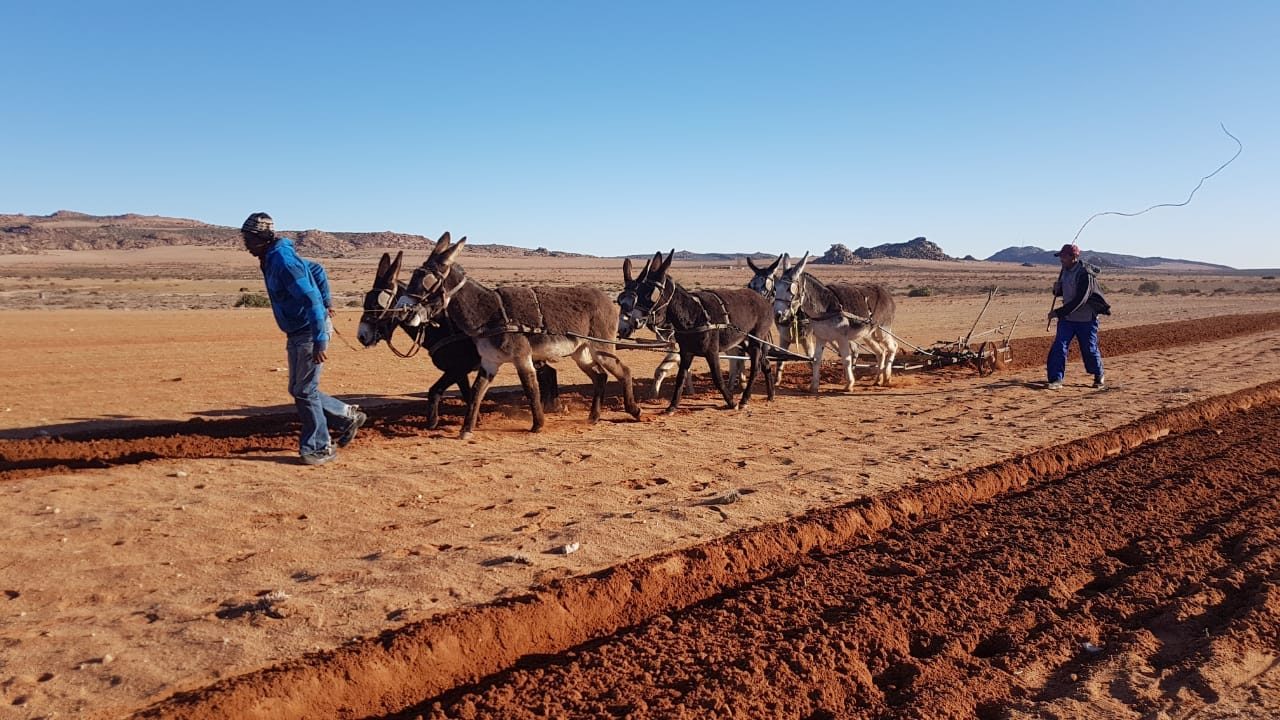 Resilience in a broken mining town

The small town of Nababeep was already on the ropes when Covid hit and the impact was brutal, although not for everyone.

I didn’t grow up with night-time fables read by my parents. I didn’t grow up with “héply eva after”.  My mom was far too busy surviving, raising six children in a two-bedroom house and being a maid in a mining town that tattooed poverty on the soul. The land that raised me hid her truths in communal reserves and stories told around nigh-time fires reserved for the old ones.

We grew up poor. That was the narrative told by and for indigenous black copper miners and their families in rural Namaqualand.  For us, having food on the table was deeply entwined with smoke rising faithfully from the mine’s smelter. The smoke was like incense from a priest’s censer, offering a morning prayer to the gods. It filled the air with sulphurous fumes, leaving us gasping and coughing to clear our lungs when the east winds blew. Over time, the elders could predict the rains coming, based on the direction the smoke blew.

Security echoed in a hooting clock that announced working hours without fail every day, starting at 7 am, then at lunchtime and tjaila (clock-out time) at 3.45pm. The 11.45pm clock was for the graveyard shift.

Over time, our bodies intuitively knew the working hours of our menfolk. The unannounced hours that they never talked about left traces in their tired eyes and on blackened hands and overalls.  We had men whose sorrowful eyes lay drowned in empty bottles of cheap wine. We could taste it in the leftover sweaty bread, reserved for hungry children that had to go without because bread was often reserved for working men.

We grew up poor, but grew up we did. There is an “eva after” narrative in mining towns too. We lived “protected” lives. Although the struggle for food and clothes was constant, the false security of housing, electricity and water provided for by the mine had us believe in a wonderland. We bought into the lie that minerals are inexhaustible.  The mine made sure of that.

But as a people we should have followed the stories in the wind, the “myths” (as Africa’s creation stories are so unwisely dubbed) that teach of responsible management of natural resources and the reservation thereof for the next generation. Instead, before 1994 responsible mineral development wasn’t on the government’s agenda and we were the victims of that.

In 1999 -2000 the mine closed and the smoke and clock disappeared for good. The glass shoe offered to mineworkers was the houses that they lived in and severance packages. There the myth of “heply eva after” ended.

With low severance packages and no prospect of employment, people ran out of money after a year. Poverty levels skyrocketed as an increasing number of people became dependent on government subsidies. Petty crime and drug and alcohol abuse increased. The town died a slow death and many men, some qualified artisans, found themselves on the shop stoep begging for dop. Over time, people departed to find work in other mining towns all over South Africa, leaving behind the aged, women and children to make up a now dying community.

It took NUM, Metorex and the government two years to negotiate an agreement that was devoid of a long-term strategy for creating a sustainable local economy beyond mining. The land, for example, was secured by Metorex through a 99-year lease agreement, but mine dumps and years of acidic drainage were not rehabilitated, making alternative land use strategies impossible. Historical assets such as museums changed hands among the wealthy, leaving little room for community-based tourism ventures. With no financial education, reinvestment opportunities or reskilling of workers, mineworkers with few skills didn’t stand a change.

So why bore you with the story of my little town in a nowhere land. The answer is Covid-19. As I watch the short-term havoc that the pandemic is wreaking, leaving death, hunger and rocketing unemployment in its wake, we should brace ourselves, for the worst that is still to come.

My eyes wells up for some of our savings group members who leave their homes in Leliefontein at 5 am for Springbok, to stand in the long R350 line.  Queuing from 7am till 5 pm with no food or water, returning home with no money. Recently, as I helped them, it struck me that this, here, is just the tip of the iceberg. The world has been here before. We’ve lived through wars, pandemics and recessions and it will get worse before it gets better.   Twenty-one years down the line, Nababeep has never been restored to her former glory but people have adapted to a new way of being.

Maybe this is the lesson to be learnt — that nothing is forever. How do you reskill and plan during times of havoc? How do you expand your planning to include whole communities? Can we afford to leave people behind? If we do, what will be the long-term repercussions? At SaveAct alone, we have too many indirect beneficiaries under our umbrella.

Paradoxically, despite the darkness, 2020 was a good year for my people. We shared R1 101 203 amongst 16 savings groups. We’ve started home gardens and one group with a share-out due in April had a grocery hamper scheme to take them through December and January. Livestock farmers tell of their first livestock sales in three years after a little respite from a long drought. Some used money borrowed from groups to buy better stock to improve their resilience years. My colleagues have their own amazing success stories to tell. And one has to believe that industries cutting down on industrial pollution restored some equilibrium in nature. Namaqualand had the best flowers in 7 years.

Another ray of light has come from seeing the changes that can be brought about by insight. As field workers, we are invited by people into their homes, either to help with saving or to do the Poverty Stoplight survey. This survey is a tool that enables families to assess their levels of poverty and carry out individual strategies to overcome their specific deprivations.

For savings group members the ability to save, access credit facilities and participate in social networks often raises their colour on the survey form from red to yellow or green (indicating danger, middle ground and safety respectively).

Post script: The shuttered mine has since been bought by Orion Mine and will be reopened.